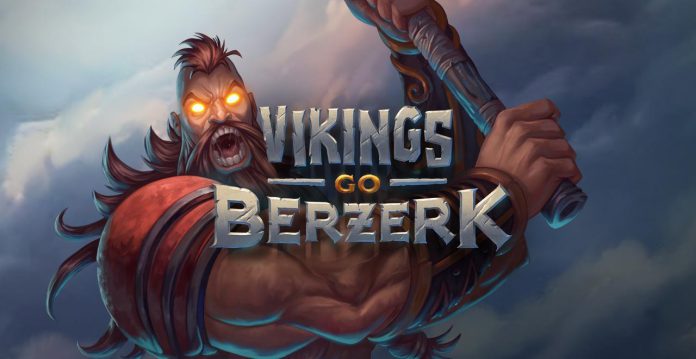 When going wild is not enough…

Vikings go Berzerk is a relative newcomer (released in late 2016) from those tricky-to-spell folk over at Yggdrasil Gaming and is the sequel to the popular and creative Vikings go Wild. Like its predecessor, its highly volatile and highly fun.

Going wild, though, was not enough for those vikings. Here we have them going berserk. And the original Berserker Vikings knew a thing or two about letting go. According to sources as illustrious as the American Journal of Psychiatry, the Berserkers were hypothesised to take psychedelic mushrooms, drink buckets of alcohol, get semi-naked and go into psychotic trance-like states in order to unleash havoc on the battlefield.

Quite the colourful bunch, then. But is playing Vikings go Berzerk likely to send you into a psychotic fury?

Ride the waves of volatility and scoop coins

The short answer is no – although it is higher variance than the majority of online slots. For a start it’s a delight to look at and a pleasure to play. Action takes place on what we can only assume is a traditional-looking viking ship. Reels are comprised primarily of coins: iron, bronze, silver and gold (smarter readers will correctly assume that iron and bronze coins are the lowest values and silver and gold the highest). Line three or more up along the payline from left to right for a win. The wild symbol substitutes for all symbols except Free Spin, Treasure Chest and the more-illustrious-sounding Golden Treasure Chest.

There are five reels, four rows, 25 paylines and you have to bet 25 coins per spin. Before this sends you into a psychedelic-mushroom-inspired-rage, bear in mind that coin values range from 0.01 to 5.00 so most budgets are well catered for.

Beneath the reels are four mean looking vikings and, for some reason, two barely-dressed comely ladies. All this fun is accompanied by a soaring, stirring, let’s-go-to-battle type soundtrack.

In the original Vikings go Wild, during the free spins if a viking symbol landed it would fight a sea snake and, if victorious, turn wild. Here the concept remains faithful to its predecessor, except the vikings are fighting sirens (poor sirens) rather than sea snakes.

Each time the viking wins (more common in this than the original, apparently) you fill up its ‘rage meter.’ Once the rage meter is full, it goes into berserker mode – always defeating the siren and always going wild.

In the Ragnorak Free Spin mode all Vikings that are berserk always turn into sticky wilds. These can be won by, among other ways, hitting the Golden Treasure Chest. In short, get the vikings to go as berserk as possible and sit back and watch the mayhem and money.

Have we gone berserk for this?

Pretty much. Its an improvement on an already top notch slot but we’re already waiting to see where those good people at Yggdrasil are going to take their full-of-rage warriors next…

Origins. Perhaps. “What is bigger,” those bright sparks over at Net Entertainment must have wondered during a board meeting, “than a fortune? Fortunes are...

No Jeff or Dicky, but we do have (the rather boringly named) Owen, Claire, Simon and Nick. Microgaming were the developers behind the predecessor...