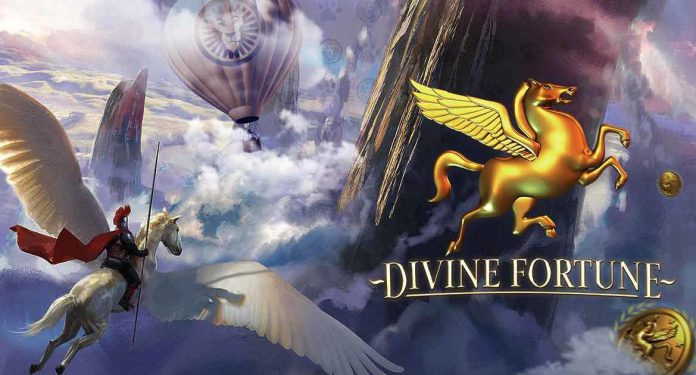 Ah, those ancient Greeks. What a marvellous bunch they were: pioneers of democracy, creators of mind-expanding philosophy, writers of epic poetry, and developers of science, technology and medicine.  Essentially the ancient Greeks are considered the founders of modern western culture with ancient Greece being seen as the cradle of modern civilisation.

So, you know, thanks for that ancient Greeks.

They were also the inspiration behind this sleek, classy and highly playable little number from Net Entertainment.

So, you know, thanks for that too.

Divine Fortune feels a little less busy than other recent releases: it has five reels, three rows and 20 paylines.

Dry facts aside, it looks gorgeous. Two stylish female statues flank the reels, along with a little jeweled vase (more on which later). The reels play host to classic figures from Greek mythology: the look-at-me-I’ve got-snakes-for-hair Medusa, the check-me-out-I’m-half-man-half-bull Minotaur, a regal looking Nemean lion and the eagle of Zeus. Making up the numbers (and making for smaller wins) are playing cards symbols.

The wild symbol is a Pegasus – a lost cost airline based in Turkey, that flies…oops, wrong Pegasus. This Pegasus is another stalwart of Greek mythology and you’ll be delighted to see one. Whenever a Pegasus lands you’ll get re-spins: one if he falls at the bottom of the reel, three if he’s at the top, and he’ll fall down a spot for each re-spin. Our friend Pegasus can often morph into an expanding wild and that’s when the wins get interesting.

There’s also a number of grand-looking Free Spins Symbol that gives you…well, we’ll leave you to fill in the blanks. Three free spin scatter symbols give you five free spins; four give you eight and if you’re fortunate enough to land five of these you will get twelve free spins. During all this bonhomie, any wild that lands will become an expanding wild and cover all positions on that wheel.

Remember that little jeweled pot we mentioned, earlier? Good, because he could soon become your best friend. Fill this pot with precious stones and you will have the chance to go for one of the progressive jackpots: the Minor Jackpot, the Major Jackpot and the Mega Jackpot. The mega’s the one you want. Although it might not quite reach the giddy heights of some progressive jackpots out there you’ll probably have more of a cultured, sophisticated, aesthetically arresting time trying to get there.